Sometimes quixotic Senator Nick Xenophon has decided to quit direct involvement in federal politics and return to his home state of South Australia where he hopes to stand for election to the state parliament. Noted for his campaign stunts when previously in state politics, this time he intends to form a new party BEST SA with an initial aim of becoming a 'third force' alongside the major parties.

Pundits have already opined that he may achieve a balance of power position after the upcoming state election... and have gone as far as saying he could be a future premier of SA? I suppose anything is possible in today's fraught Australian political landscape, though 'Premier X-man' does sound like a bridge too far in one gigantic leap for 'Nick'. 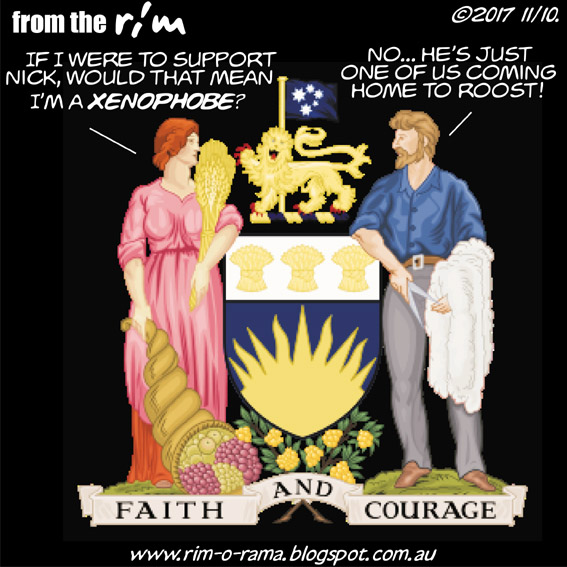 Sounding somewhat like the saviour of all mankind, our PM joyfully announces that among other legislative white-anting he has now brought us into the 21st century by enabling law enforcement agencies to extend incarceration of suspects for 14 days without charges having to be laid. And, it seems that includes minors 10 years old and above!

What is it about this ruling mob that attracts them to locking people up without any proof of evil intent or actual law-breaking activities? 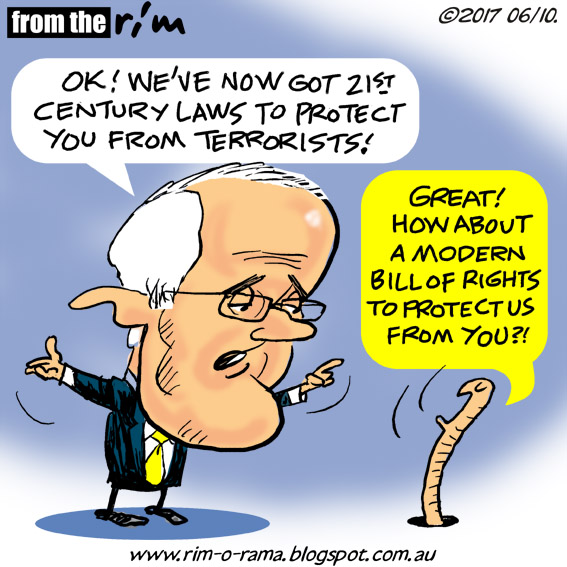 I'm the product of paternal seeds which were sewn by a former Londoner who first set foot on this continent during the last half of the 1850s.  He was a free settler obviously attracted to this country by the then gold rush, because after disembarking in Melbourne he was soon a citizen of Inglewood right among the diggings. I believe that town remains well populated by Masons and off-shoots of that tree even to this day.

The country remained a collection of colonies until the federated nation of Australia came into being on January 0l, 1901. I'm therefore non-plussed by the fact thats many Australians still regard their national day of celebration as January 26th on which date in 1788 the 'great southland' was hi-jacked by the British Empire primarily as a dumping ground for convicted felons they no longer wished to house in the 'old country'!

I'm immensely proud of my country of birth, but not by the way it was first established. Our forebears finally achieved some form of honourable independence as a nation by forming the Commonwealth of Australia as a separate entity from Britain on 01/01/1901... which intentionally or not, seems to be echoed by latter-day national sports fans in their chant 'Aussie, Aussie, Aussie OI,OI,OI! 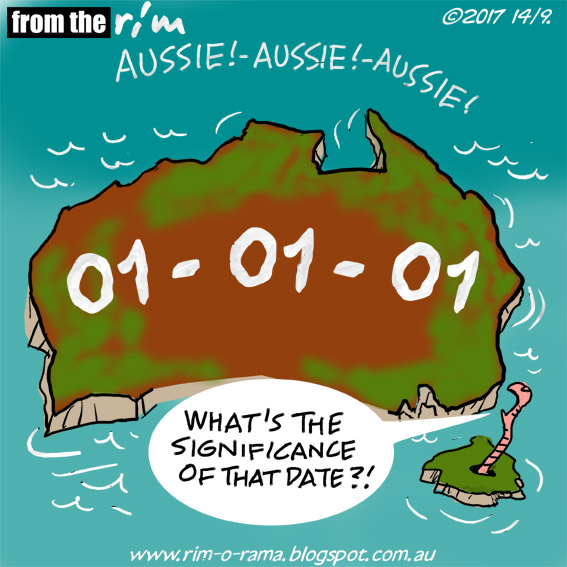 Well, the government has had its day in the High Court and now awaits the decision on whether or not their decision to substitute a simple legislative method of determining 'Marriage Equality' with what looks more and more like an attempt to boost the coffers of Australia Post with mis-directed tax-payers funds passes the test of constitutional constraints.

Lesson may well be 'don't promise things you can't deliver'... which should be the main premise in chapter one of the Political Bible? 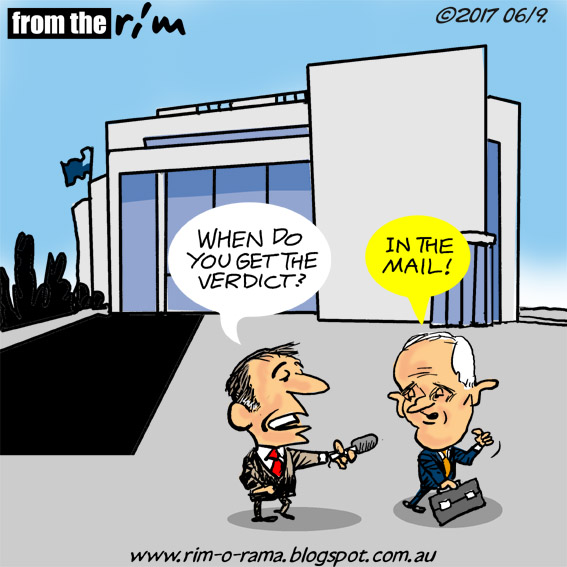 The Perils of Pauline?

I used the caption 'If the hat fits, wear it!' as the text associated with 'Barnaby the bi-national' earlier this week. It would've fitted this piece about the perils of Pauline just as well... but I couldn't fore-see her idiotic stunt in the Senate. 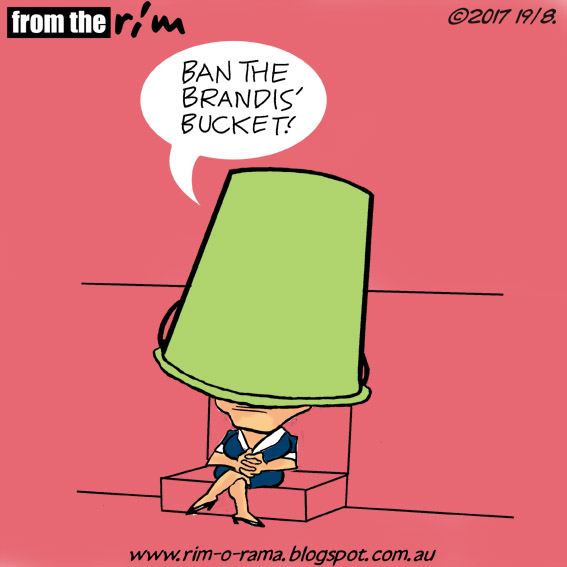 Barnaby Joyce is undoubtedly talented in many aspects of his life's work.  Sadly, political leadership does not appear to be among his best attributes. That is not to say his contribution to parliamentary activities will not be missed should his dual-citizen status be found by the High Court to be incompatible with the meaning of section 44-(i) of the constitution.

All other considerations aside... Barnaby is one of the most entertaining of the Buffoon Troupe at present performing for us in Canberra. Should he be enjoined to vacate the 'House', our ability to laugh-off the continuing failings of our political leadership will be sorely strained! 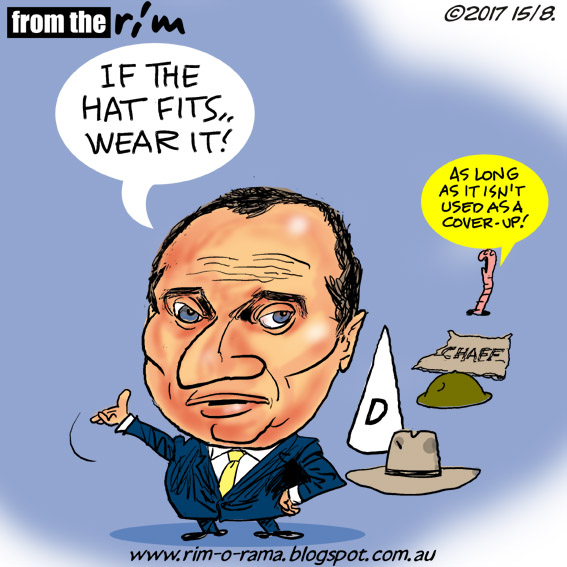 The persistence in avoiding a parliamentary vote on legislation to enable same sex marriage is beginning to look like a 'death wish' on the part of the coalition government. Instead they want to waste millions of dollars of tax-payers money to skirt around the need to show leadership and/or back-bone in prosecuting their right to implement representative governance already bestowed upon them by the last election result. OK their 'policy pitch' in the lead-up to the election may have included the promise of plebiscite on 'marriage equality' ... but Billy the blind miner's dog knows that was purely a sop to quieten the rabid right wing of the Liberal party.

With the general consensus being that any form of nation-wide vote on the question would result in a substantial YES victory... the electorate will look upon the exercise of a nation-wide plebiscite or postal vote as a pure and simple waste of money which could be put to better use in the government's constant bleating about 'Budget repair' or better still in support of better HEALTH, EDUCATION, EMPLOYMENT opportunities, ENERGY reform and/or INFRASTRUCTURE building!

As the accompanying cartoon suggests...maybe the people have already given their response to the stupidity of plebiscite by stripping the coalition of fourteen seats at the election?! 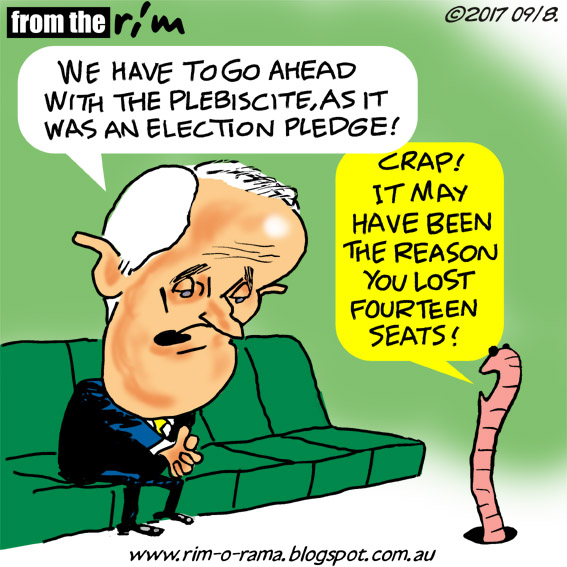